Boasting the best sourdough pizzas in all the land, we’re happy to share that Franco Manca pizzeria opened up a new branch on King Street last month! 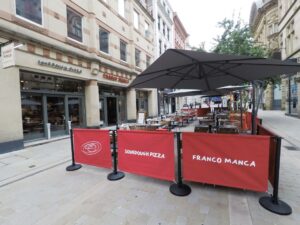 Franco Manca translates to “Franco is missing” in Italian. This is in reference to the former owner of the original Brixton restaurant in 1986, where it was called simpy ‘Francos’. By 2008 Franco had had enough and asked his friend Giuseppe Mascoli if he would like to take it over. Giuseppe and his friend Bridget took it over and called it Franco Manca in homage to Franco’s hard work.

Despite never running a restaurant before, Giuseppe and Bridget made it a success and soon opened up another restaurant. Today, Franco Mancas can be found in many locations across the country and we’re incredibly happy that King Street, Manchester is one of them! 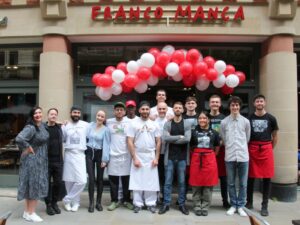 Dough is made fresh on site every day and the restaurant uses specially selected seasonal ingredients that are sourced locally. Franco Manca’s Neapolitan-inspired cuisine is a true taste of Italy in the UK and it is quickly becoming one of Manchester’s best al fresco dining spots. We’d recommend booking your table before the sun disappears and the Manchester rain returns.