Manchester has much to love about it, but for those spending the day, King Street has to take the crown.

Sandra Martorell, director of Tast Catala, the Catalan restaurant that opened on King Street in 2018 (yes, that one, the one famously backed by Manchester City boss Pep Guardiola, with Michelin-star chef Paco Perez as executive chef) was thrilled when they were able to locate their planned restaurant on, she says, perhaps her favourite street in Manchester.

‘I grew up in a small village about 40km from Barcelona,’ she says, ‘and moved to Manchester with my husband when he took a job with Manchester City. I love living in Manchester; we live in the city centre and it’s been so exciting watching it grow so fast and so excitingly. Since we arrived in 2012 the changes have been amazing; it has grown into a truly European city.

‘As we arrived, a small community of Catalan people grew up here, and we met and talked and realised how much we missed the kind of places we would eat at in Barcelona. My background is in food and hospitality, and we would often talk about opening our own restaurant. After two years of talk, we decided to go for it – but finding the right location was key. It was incredibly difficult, but when we saw this place on King Street I couldn’t have been happier, it had always been one of my favourite streets. The lower end of King Street is one of the few pedestrianised areas in the city – it’s not quite Las Ramblas, but it’s close!’

One of the happiest bonuses of their King Street location is the proximity to several other renowned restaurants, including El Gato Negro, with chef Simon Shaw, Rosso (part-owned by Rio Ferdinand), Grand Pacific, housed in the former Reform Club, and Kala, from the team behind famed venues The Sticky Walnut, in Chester, and Hispi Bistro, in Didsbury. New to the street, and highly recommended by Sandra, is Habas, the latest offering from El Gato Negro’s Simon Shaw.

‘It is a Middle Eastern restaurant, and so cool and beautiful,’ she says. ‘The food and place is great.’  Living in the city centre, Sandra always has a clear idea of how to show the best of Manchester to visitors.

‘I very much like the King Street Townhouse hotel, I feel like I’m in a Sherlock Holmes movie when I’m there, to me it has a very British and authentic style,’ she says. ‘Even if you’re not staying there, it’s a great place for brunch, perfect for getting that cool Manchester vibe. And then just a moment’s walk away are some beautiful shops.

‘I love Castle Fine Art, on King Street, their windows always draw me in and they have some very exciting collections. The most beautiful building on King Street is also home to the most fabulous shop, Boodles. We have a view of the building from our top floors at the restaurant and it’s just stunning – and of course the jewellery is out of this world. 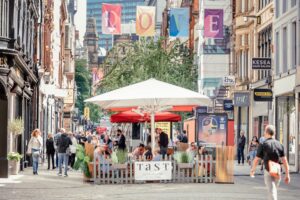 ‘One of my favourites shops is The White Company; I love the Little White Company collections for my little ones. I always find something in there. And for me, there’s plenty of fashion to choose from – Britain’s own iconic fashion designer Vivienne Westwood has a store here, and there’s Hobbs, Mint Velvet, Belstaff and Loake, too, among others.’

This summer has seen the arrival of independent pop-ups, which give the street quite the continental feel, Sandra says.

‘The pop-ups bring a great vibe to the street. They’re all different and unique and a real variety. They’re quirky and unusual and not at all what you might usually find in the city centre – I love it. Really excitingly, there is the Lazerian Space next door to us at Tast and the Pop-Up Club, which has opened next door to Boodles. It’s filled with interesting and unusual finds, from small independents that couldn’t usually find a place in a location like this. It’s very reminiscent of the kind of shop you might find in SoHo, New York. I love it.

‘This summer, King Street really is the place to be. With the shops all open again and the restaurants having outside terraces along the street, it’s really vibrant and exciting. I am so happy to be a part of it.’