This month is LGBTQ+ History Month. Let’s take a look back at some of the key milestones that have shaped the timeline of the LGBTQ+ community in Manchester. 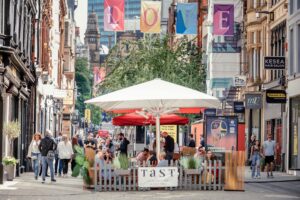 The first Manchester Pride was held on the August bank holiday of 1985 in the Gay Village. Today, it is one of the UK‘s leading LGBTQ+ festivals. Manchester Pride provides opportunities that engage LGBTQ+ individuals in Greater Manchester to thrive. Every penny raised is given back to the community and the festival is dedicated to raising awareness for LGBTQ+ issues in the fight for equality.

Lesbians and trans women of colour were some of the key people involved in the Stonewall riots of 1968, sparking a movement which formed the Gay Liberation Front (GLF). The GLF organised a march to continue the momentum of the uprising. This became known as the origin of Pride. Fast forward 50 years and we have the celebratory Pride we all know and love, but it’s important to remember that it wouldn’t be possible if not for trans and gender non-conforming people of colour.

Manchester Pride commenced in 1985 in the Gay Village with the support of a new batch of Labour Party Councillors. The Labour Party even appointed a Lesbian and Gay officer, a move inspired by Ken Livingstone. In 1986, the bars on Oxford Street all got together to raise money for AIDS organisations in the city, with the gay community pulling their efforts in true activism style, despite police hostility at the time.

By 1989, events were all about fundraising for the wards at Mansall Hospital to help people receiving treatment for HIV/AIDS.

After a growth in popularity, the Village Charity was established, running the festival then known as Manchester Mardi Gras, ‘The Festival of Fun’ – complete with cultural performances and fireworks; the epitome of a good time! They raised £15,000.

BiPhoria was formed for bisexual people in Manchester, England. It is the oldest extant bisexual organisation in the UK. They provide opportunities to meet and talk with other bisexuals and those who are questioning their sexual orientation. The first bisexual Pride flag would be unveiled 4 years later on December 5, 1998.

2003 saw the abolition of Section 28 of the 1988 Local Government Act. Section 28, a piece of legislation introduced by Margaret Thatcher’s Conservative government, stated that local authorities were not allowed to “intentionally promote homosexuality or publish material with the intention of promoting homosexuality”.

The Mardi Gras festival had over 100,000 colourful Pride-goers attending throughout the ’90s and early ’00s. In 2003, Manchester also hosted ‘EuroPride’. A ten-day event comprising sports, music, dance and other cultural activities all culminating in the August bank holiday termed as ‘The Big Weekend’. In the closing ceremony of Mardi Gras, it was announced that the event would be known as Manchester Pride, with The Big Weekend as it’s flagship event.

The first Sparkle weekend for the trans community is held on Canal Street. Sparkle is a national transgender charity based in Manchester, celebrating the transgender community. Sparkle Weekend occurs on the second weekend of every July, with local bars and restaurants sponsoring and advertising the event.

Manchester Pride officially became a charity in its own right to raise money and awareness for LGBTQ+ people across Greater Manchester.

The Marriage (Same-Sex Couples) Act 2013 is passed into law.

Carl Austin-Behan became Manchester’s first openly gay Lord Mayor, and at age 44, he was also one of the youngest. His term ended in May 2017, and in August 2018, he was appointed LGBT advisor to Greater Manchester mayor, Andy Burnham.

Manchester Pride was successfully running The Big Weekend event drawing over 170,000 visitors and raising over £149,000 for the community. Did you know Manchester was the first parade to include the police, the army and NHS floats?

Manchester Pride was praised for becoming the first UK Pride to adopt the additional colours
on the flag, ensuring people from black and minority ethnicity (BAME) backgrounds feel represented and welcome at their events.

Pride was different in 2020 for everyone, but also provided an opportunity to learn our Pride history.